(Don’t) go With the Flow

(Don’t) go With the Flow

What your teen needs to know about highway safety. 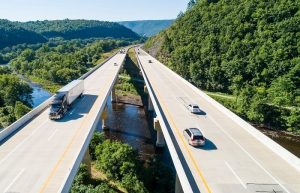 Though they might seem common to us, highways are challenging environments for new teen drivers.

Picture it: speeding cars packed into a few lanes, where the situations change suddenly with little room for error. Throw in other common hazards, from distracted drivers to construction zones, and the danger is clear, particularly for inexperienced teens.

You can help keep your new driver safe in these scenarios, but he or she needs to know what to prepare for and avoid. As we approach National Teen Driver Safety Week, here are a few highway issues and tips to cover with your teen.

Does your teen know how long it takes to bring a vehicle to a full stop? On most roads, this isn’t much of a concern, since we often have plenty of time and space to stop for a light or hazard. On highways, however, traffic can go from high speeds to dead stops without much warning, putting your teen and the drivers ahead of and behind him or her at risk.

Teaching your teen about sudden braking can help illustrate this danger, but the best preventative tip is to drive slower and increase your following distance between vehicles. This gives your teen more time to react and avoid a crash when traffic speeds change or in case another hazard pops up, like a driver with dim or missing brake lights stopping in front of you. It’s best to leave several car-lengths clear ahead of you, and if other vehicles merge into this space, slow down until you regain this room.

The old standby for long drives, cruise control can be a handy tool, but it is not free of risks. Similar to other safety features, your teen should know how to safely use cruise control without relying on it to drive for him or her. You want your teen to understand the basics, like how to set and deactivate this feature, long before using it on a crowded highway. Since properly using cruise control requires a number of skills, from concentration and situational awareness to the ability to judge the speeds and gaps between vehicles, this is a skill your teen will only learn with practice.

Have your teen try this feature out on straight, quiet roads without much traffic so he or she understands how to slow or stop the vehicle from a set speed. Cruise control can put a driver at ease, particularly when used for long stretches at a time, so remind your teen to stay focused at all times when using it.

It’s a simple truth that people drive fast on the highway and they tend to get frustrated when you don’t do the same. But that’s no reason to speed, drive erratically or make tight merges. Though drivers often say, ‘I was just going with the flow of traffic,’ your teen should know that is not a valid excuse.

The simple layout of a highway goes like this: faster speeds in the left lane for passing, slower speeds on the right. What does that mean for your teen? Stick to the center lanes, where you won’t be in the way of drivers going too fast or using the exit and entrance ramps. This allows you to stick to the speed limit – even if other drivers are exceeding it – and keep an eye on the surrounding lanes for potential hazards.

Remember: your teen’s goal is to arrive at the destination safely, not to get there first. Drive this point home as your teen gains experience on highways and on all roads, crowded or not.